Return to the Way  Back When Index

Now, some people say that the only purpose for a steeple is to hold a bell, but we were different.  We did not have a bell until 1817.  In 1797, we built the belfry into the steeple tower for a future time when the bell would eventually arrive.  Remember that Reverend Payson offered to donate a bell, in order to motivate the town to build the second meeting house.   As it turned out, the town ended up supplying the bell.  In 1797, we also did not have a clock.  That came much later and with a major change to the steeple design.  If you look at our current steeple structure, it looks very different from the way it looked in 1797.   Actually, we have had a total of three steeples since 1797, and we will look at those other two in future articles.

As you know, New England churches are famous for their steeples, and you will see many different styles as you drive from town to town.  Who came up with the various steeple designs?   Many of these architectural designs in New England came in part from American-born Charles Bulfinch and Asher Benjamin, along with Englishmen, James Gibbs and Sir Christopher Wren.   Some architects would publish books which had detailed patterns and plans for buildings, including meeting houses, steeples, and many other features that were built into meeting houses.  Carpenters (in our case, John and David Barker) along with the townspeople would consult these pattern books, select options that fit within their budget, and make a customized design.  This seems to be why we see so many different styles throughout New England, but with a familiar look.  For example, some spires were circular, four-sided, six-sided, or eight-sided.  Lanterns would be octagonal, square, or rectangular; or maybe there would not be a lantern.  Sometimes, the clock would be located below the belfry; sometimes above, like our current steeple.  Some features that one might have chosen came from books, such as Asher Benjamin’s The Country Builder’s Assistant or James Gibbs’Book of Architecture.   So, the next time you look at a church, have some fun and pay attention to the details of the steeple.  Note the differences and similarities to other steeples that you have seen.

Lastly, there was the question of how to get that huge steeple up there.  Usually, the base towers were built either of brick or wood.  For brick towers, the steeple would be lifted internally up through the tower since there was no internal structural framing.  On the other hand, for a wooden tower, like ours, the steeple had to be assembled on the ground adjacent to the tower and then lifted externally up along the tower wall with ropes, pulleys, and lifting jacks.  This was because a wooden tower would have internal framing that would get in the way.  Today, some towns are renovating their old meeting houses and steeples. Here is a photo of a current day belfry-steeple raising and another photo of the interior framing of a steeple.  Imagine trying to raise a steeple today with manual labor and without machine-powered cranes.

Well, we have looked at the church, and now the steeple. 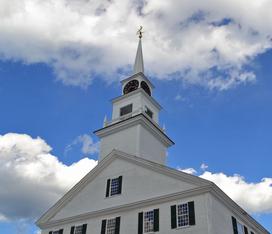